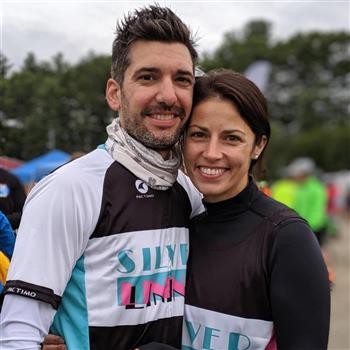 Entering year 4 of life with PD

Time for my annual update. Spoiler alert: Still no cure!

Entering year four of my diagnosis with Parkinson's Disease I'm feeling a bit like I did entering my fourth year of high school: over it, jaded and thinking about something else.

Writing this update every year is really the only time each year that I actually force myself to confront my reality instead of pretending that I don't have Parkinson's. It's the one time I stop acting like everything is perfectly fine in hopes that you'll read this and the effort will be rewarded with a contribution towards making my condition a distant memory one day.

The TLDR this year is simple: is my Parkinson's getting worse? Yes. Am I still able to (mostly) mask my symptoms and continue on with my life? Also yes (thankfully). Is that enough? Hell no.

But on the bright side, I turned 40 this past June. So that's something. All I wanted to mark this milestone was to have an adventure. I'm grateful to my boss, Mike, for allowing me to take the month of July off and take an epic road trip that was most likely the greatest adventure I've ever had.

If you follow me on social media, then you've probably seen the picture-perfect photos from our journey. Maybe you even felt a pang of jealousy. But the dark reality of this adventure is that there was a motive. I'm doing everything I can do now in case I can't do it later.

Originally, I had flipped this diagnosis into a positive by saying I would carpe that diem and sieze the day. Years later that sentiment remains true but, if I'm being totally honest (which I've promised to do here every year), now a subtle melancholy about why I have to maintain this aggressively positive approach to life lingers like a bitter aftertaste.

I've started seeing a therapist after talking to a few other people with early-onset PD who urged me to do so. I think everyone should have one, same as everyone should have a primary care physician. Mental health matters just as much as physical health. Perhaps even more so.

Beyond therapy, having a support system of friends and family and clients that care has carried me through a lot of bitterness and despair. I'm thankful for friends like Phil, John, Matt (all of them), Brian (all of them), Eric (all of them), Sarah, and so many more that continually check in on me to see how I'm doing physically and mentally.

I'm also grateful to all my new colleagues Tom, Ari, Armanie, Al, Grace, and Alex for everything they do each week allowing me to focus on my core responsibilities at work and covering for me so I could take a month out of the office, disconnect, and enjoy that time with my family. They have helped me cut down a considerable amount of stress, which is one of the three things the neurologist who diagnosed me said I should do: take the meds, cut down on stress, and exercise.

Speaking of exercise, that brings us to why you're reading this update on a page for the New England Parkinson's Ride...

I'm not going to lie. I'm totally out of shape. Despite my love of cycling, I simply haven't been able to cut out any time for it. Blame a lot of that on simply being busy now that life is going back to something more closely resembling normal than it did two years ago ("COVID is over guys! We did it!" he said sarcastically).

You can also blame it on my creative side that continues to keep me up late working on music and thus gets me up late in the morning, rushing out the door and not leaving any time for exercise.

Sure, we hiked about 60 miles in July but I must've got my b's and h's crossed because I've barely been on my bike. I didn't even have time to watch my beloved Tour de France let alone get more than two short rides in so far this year.

That stops now, though. On September 10th, I will be riding with the New England Parkinson's Ride, the largest Team Fox single-day fundraising event in the world. The Ride has raised over $8.5 million since inception and has a goal to raise an additional $2 million in 2022.  Normally we start fundraising in April but this year we're going to do an August blitz, sparing you multiple months of us begging for donations in emails and on social media. In the meantime, I'm going to be training to get my ass into gear so that I can comfortably ride the metric century (60 miles). That's the goal.

So if you've donated in the past, thank you - I hope you'll donate again. And if you haven't before, now would be a great time. Again, the best thing I feel I can do to combat the disease is to raise money for a cure. Advancements are being made every day and I am optimistic we can help fund the research that eventually finds a cure. Thank you for all your continued love and support. LFG