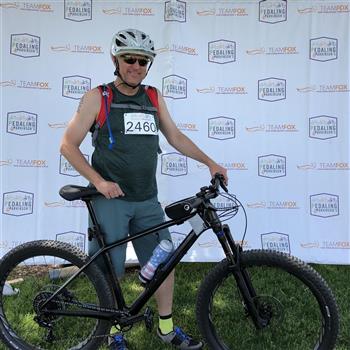 Welcome to My Pedaling4Parkinson's Donation Page

Everyone can help end Parkinson’s disease. There is no known cure, yet. More than six million people worldwide live with Parkinson's today. It is the second most common neurological disorder. In the United States, approximately 60,000 new cases will be diagnosed this year alone.

I’m one of thousands of people around the globe who are turning their passions into Team Fox fundraisers to help them speed a cure for Parkinson’s. When you give today, 100 percent of Team Fox proceeds go straight to MJFF’s programmatic efforts. Thank you for being part of this team.

I will personally match every donation received so that your donation will count twice as much. Thanks for supporting my Ride - William

7. JJJim And Denise Jones
What a great cause!

8. JRJohnny Richards
Wish I was able to bring my bike out and ride with you! jr