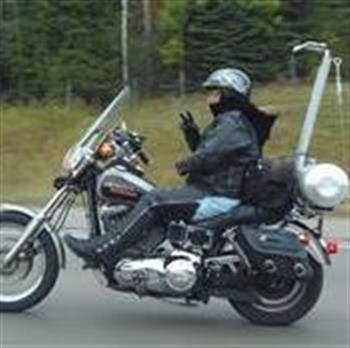 After setting a 'NEW WORLD RECORD' in 2016 of 588 miles, but falling short of my intended goal due to a weather factor........ on Sunday, Oct. 4, 2020, I will again, attempt to ride my motorcycle a total of 680 miles........ Non-Stop...... and of course…. 'No Handed'.
With my four previous world records: 314 miles (2010), 327 miles (2011), 534 miles (2015) and the 588 miles (2016); also riding 512 miles in 2012 on a ride from the Mackinac Bridge all the way to Covington, Kentucky (1 stop) ………… I am again ready to try the longest ride yet. I have ridden the 680 miles five times before, with 1 unplanned stop each time, so hopefully, this year will be the year with no stops.
This year, as the last six years, I will be starting at the Ohio/Michigan border (Exit 1) and travel north, west, then back east as I travel throughout Michigan, then again head north and finish at the Mackinac Bridge approximately 10 hours after my departure. This ride will take place exclusively in Michigan (Pure Michigan), and cover all four compass points of the Lower Peninsula.
The reason for this ride, as well as the other rides, is to raise awareness for the need to find a cure for the devastation caused by Parkinson's disease, and to raise funds for the Michael J. Fox Foundation for Parkinson's Research. After watching the progression and finally losing my father to this disease in 2008, I have made it my personal mission, with my talent for riding, to do what I can to aid in finding a cure for this disease.
Please join me in this cause. Five million people worldwide are living with Parkinson's disease - a chronic, degenerative neurological disorder. In the United States, 60,000 new cases will be diagnosed this year alone. There is no known cure for Parkinson's disease.
About Team Fox Team Fox is The Michael J. Fox Foundation's (MJFF) grassroots community fundraising program. It is made up of thousands of people worldwide who raise funds and awareness for Parkinson's disease research. All funds raised through Team Fox go directly to MJFF to further its mission to accelerate the delivery of life-changing treatments, and ultimately a cure, to people with Parkinson's disease.
Help us speed a cure for Parkinson's! Thank You for your Support,
Phil Comar a.k.a. No Hand Man