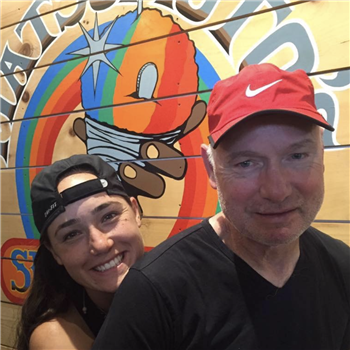 Five million people worldwide are living with Parkinson’s disease — a chronic, degenerative neurological disorder. Of those five million people, there is one person battling this disease that affects me straight to the core of my heart. That person is my Dad.

For those of you who do not know what Parkinson's disease is, it is a progressive disease of the nervous system marked by tremor, muscular rigidity, and slow, imprecise movement, chiefly affecting middle-aged and elderly people. It is associated with degeneration of the basal ganglia of the brain and a deficiency of the neurotransmitter dopamine. In simple terms, Parkinson's disease affects ones mobility, and those who suffer from it have trouble moving the way they want to. As of today, there is no known cure to Parkinson's disease.

In October of 2005, after noticing some changes in his normal daily activity and physical activity, my Dad went to the doctor for a simple check up. The check up led to examinations and further testing concluded a shocking diagnosis. The doctor determined that my dad was experiencing symptoms of Parkinson's disease. It didn't quite hit me at first; I was so young and naive to the situation. All I knew was that Michael J Fox and Muhammad Ali both suffered from the disease. I couldn't understand how my Dad, my biggest superhero, was not feeling well. It was so hard to look at the strongest man I had ever known and realize that things about him were going to change. In the beginning I pretended like there was nothing even wrong. It wasn't until I left for college in 2007 that I felt the hard crash of reality. Being away from my Dad and being away from my family, made everything become so real.

In the beginning, the transition into a life independent from my mom and dad was not easy. I guess you could say I became somewhat of a burden, a pain to deal with and not very pleasant to be around. I did not know how to express my emotions from the situation in a positive way. Anger, confusion, and frustration were just a few that began to consume my every thought. Questions would ring through my head, why... Why my dad? None of it made any sense at the time, and it wasn't until I stopped trying to make sense of the situation that I started to heal. I finally just accepted the things that could not be changed and learned how to be a better friend, teammate, sister, and daughter.

For many years I sat back and watched my family's life change. As my brothers and I continue to grow older and become successful in our own ways, something feels a little empty inside. I have made changes to make a difference in my life, and being a coach I am able to influence the lives of many young men and women, children, and even their parents, but recently I have realized I need to do more to make a difference for my Dad. Not just my Dad but all the people across the world suffering from this terrible disease. I have thought about everything my dad specifically has sacrificed for my family and all of the hard work it took to get to the point in his life now. I can picture it all... I see my super hero first in uniform, fulfilling his service for our country when he was drafted into the United States Marines - This is actually what led him to meeting my mom as he was stationed in Iwakuni, Japan. I can imagine the hours of reading, writing, and studying it took to acquire his extensive undergraduate and law school educations at Ohio State University, Cornell University, and Harvard. I think about the amount of time and frustration that he had to have experienced when learning the Japanese language, so that he could better communicate with my mom and do work overseas in Japan. I can remember all the long work days, and always waiting for my dad to come home from work so that we could eat dinner together. Some nights we wouldn't eat until 10 o' clock. I even remember going to work with him sometimes on Saturday mornings when I was just a little kid, always stopping at Cinnabon first to get our sugar fix. With all that sugar I was a terror running around the office, until I finally sat down to draw while he finished his work. He would always let me raid the office supply closets first where I would take all the sharpies I could find. He spent hours traveling on business trips and being away from our family, an had stressful sleepless nights, all to build a beautiful life for my mom, my brothers, and myself.

In just the United States 60,000 new cases will be diagnosed this year. Someone's wife, husband, mother, father, sister, brother, daughter, or son will get the news that they have Parkinson's disease. Just like my dad did 15 years ago. With the news then, and every day that has come since that day, my Dad has fought tenaciously against this disease. Through the ups and downs, he has fought with such grace, and indescribable courage. Now its my turn to fight for him, once again, and not only for him but for everyone suffering from Parkinson's.

Mark Twain said it best, "In 20 years you will be more disappointed by what you didn't do than by what you did." It's time to fight for all the other daddy's girls who are living in the same position that I am. The little girls sho dream of the day a cure will be found. In 2014 I ran my first Marathon in Hawaii. With the help of family, and friends, we were able to raise $11,430.00 for Parkinson's research. Since that date I ran a second marathon in Orange County, a half marathon in San Francisco, and a triathlon in Santa Barbara. I am now about to begin training for my third marathon, which I will be running July 5th in Portland, Oregon. I also have a half marathon planned in May in Santa Cruz as part of my training regiment. By running these two races, I am hoping to inspire my friends and family to help me hit a goal of raising $15,000 in honor of my father Tom Woofter for Michael J Fox foundation.

I whole heartedly believe in this foundation because they are the largest nonprofit funder of Parkinson's research worldwide. $400 Million dollars in research has been funded and 89 cents of every dollar goes straight to research programs, in hopes to find a cure. I want to continue to make a difference. By joining this movement, I can make a difference, and so can you. My fundraising goal has no limit; I will try to raise as much money as possible in honor of my dad. I do not want to just sit back and accept the things I cannot change, because together we have the power to fight, and hopefully one day we won't have to accept Parkinson's disease anymore. Hopefully one day, because of our collective efforts, WE WILL FIND A CURE.

Thank you to everyone who has visited my donation site. I already know how physically challenging this journey will be for me, but it always seems the hardest part is the emotional component. This was the story I shared back in 2014, with updates of course. I appreciate you taking the time to read through my dads story.. my families story.. and wether you are in a position to donate money or not it is ok. A lot of the time, a hug is more than enough. The power of love is immeasurable. I appreciate all of the love and support you have constantly given to my family over the years. I wish you all happiness, health, and success in this New Year. 9. SMSteve Matsuura
I pray from the bottom of my heart that Tom's condition will improve.

11. ?Anonymous
What an amazing man! I haven't known you for long, but I can tell that you are such a strong role model and inspiration to many lucky people!
12. ESEsther Sprague
Go Sarah!

14. SMSusan Springborg/Greg Martin
It's great you are doing this, Sarah!

15. GHGeorge Hammond
Be there now, as Tom always is, for your family and your friends.

17. DTDavid And Terri
Sarah you are one driven individual and we commend your efforts. much love
18. ?Anonymous

20. PZPhilip Zender
21. TTerashima Family
You are an all around AMAZING person! Your parents must be so proud!!

22. AHAnn Heuser
You are so awesome to do this and support such an important cause. You’re an amazing daughter and I know your dad is proud of you!

23. MRMichael Ritz
In honor of the Woofter family!

27. TTerry Eichel
Because both you and your dad inspire me!