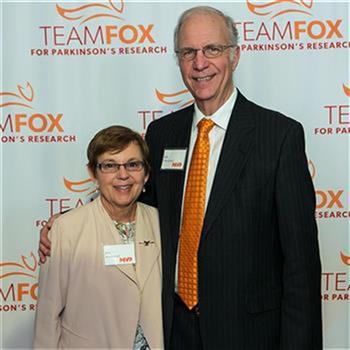 Jane And Jack Armistead
Donate
Outpace Parkinson's 7 will be the seventh in a very successful series of 5Ks to raise awareness of Parkinson's Disease while also raising funds for the Michael J. Fox Foundation for Parkinson's Research. Jane Armistead, who co-leads the planning with her husband Jack, was diagnosed with Parkinson's in 2011. This year, the race will be offered both on-site and virtually. Register at RunSignup.com. See pdathens.com for more details, including how to register by mail, how to participate and submit times for the virtual race, how to qualify for awards and T-shirts, and how to  become a sponsor.

. Five million people worldwide are living with Parkinson’s disease — a chronic, degenerative neurological disorder. In the United States, 60,000 new cases will be diagnosed this year alone.

There is no known cure for Parkinson’s disease. But through your support of Team Fox, you can help change this.

Team Fox is the grassroots community fundraising program at The Michael J. Fox Foundation for Parkinson’s Research (MJFF). MJFF accelerates high-impact science through smart risk taking and problem solving with a commitment to urgency and efficiency. I’m one of thousands of people around the globe who are turning their passions into Team Fox fundraisers to help them speed a cure for Parkinson’s. When you give today, 100 percent of Team Fox proceeds go straight to MJFF research programs.

3. JBJoanna Barlow
Much love and many congratulations to Jane and Jack and good luck by the lorryload for this fabulous event xx Jo and Stephen