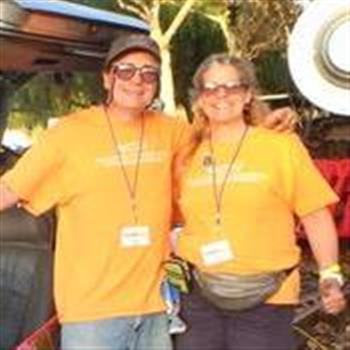 Oliver and Terry Holler And Friends!

Oliver & Terry Holler
Donate
We're going 'ToTheFuture!'  -Come with us!
We (Terry and Oliver Holler) are traveling to the future in a DeLorean Time Machine that we hand built, raising funds and awareness through Team Fox.
Please visit our website: http://www.ToTheFuture.org
Our travels have taken us throughout 28 countries (and all 50 United States -so far!) and we've raised over $850,000.00 for the Michael J. Fox Foundation for Parkinson's Research since joining in 2006.
Name of Event:  ToTheFuture
Date of Event: On going.
An estimated 10 million people worldwide are living with Parkinson's disease, a chronic, degenerative neurological disorder. In the United States, 60,000 new cases will be diagnosed this year alone. There is no known cure for Parkinson's disease.
About Team Fox:
Team Fox is The Michael J. Fox Foundation's (MJFF) grassroots community fundraising program.  It is made up of thousands of people worldwide who raise funds and awareness for Parkinson's disease research.  All funds raised through Team Fox go directly to MJFF to further its mission to accelerate the delivery of life-changing treatments, and ultimately a cure, to people with Parkinson's disease.
Help us speed a cure for Parkinson's!