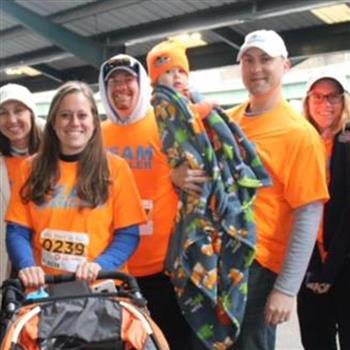 Thank you for visiting my personal and team page. As many know we started this fight when my dad was diagnosed with Parkinson's Disease far before many knew really what is was, anyone else who had it, and what the days ahead would be.

This year is going to be extra special as the event day is my dad's birthday <3 So there isn't a better way we'd rather spend our day than honoring my dad and celebrating him by making a difference.

Sadly my dad lost his battle to Parkinson's in 2013. Being involved in the Parkinson's Community has been a way for us to continue to show my dad's true fight and dedication to anything he did. My dad was amazing, no matter what my dad did, he did it with greatness. He influenced so many during his lifetime and we can only dedicate ourselves to doing great things in his name and his honor.

A Parkinson's Cure is in our near future,we truly believe that, and we are going to help get there. Parkinson's research, treatment, studies, medicines, and life opportunities have come so far since my dad's diagnosis and we know it is because of the fundraising dedication of many others that help provide resources and money to continue to make big changes.

Thank you all for all your continued support over the years. I would do anything to have my dad back.....but the people we have met along this journey and the friends who always jump in to help sure have helped show us what life really is about.

2. JJoe and Kathy
Thanks for all you do!🧡🦊
3. ACAly Carpenter
I sat here trying to think of the "perfect message" and I just can't come up with anything adequate. Love the Spangler family!
4. KSKevin Shea
Raffle tickets please

6. LRLaura Rhoades
Best of luck for a beautiful day for your 5K on your dad's birthday and hope you reach your goal for a great cause. Your dad would be so very proud of you and your family.